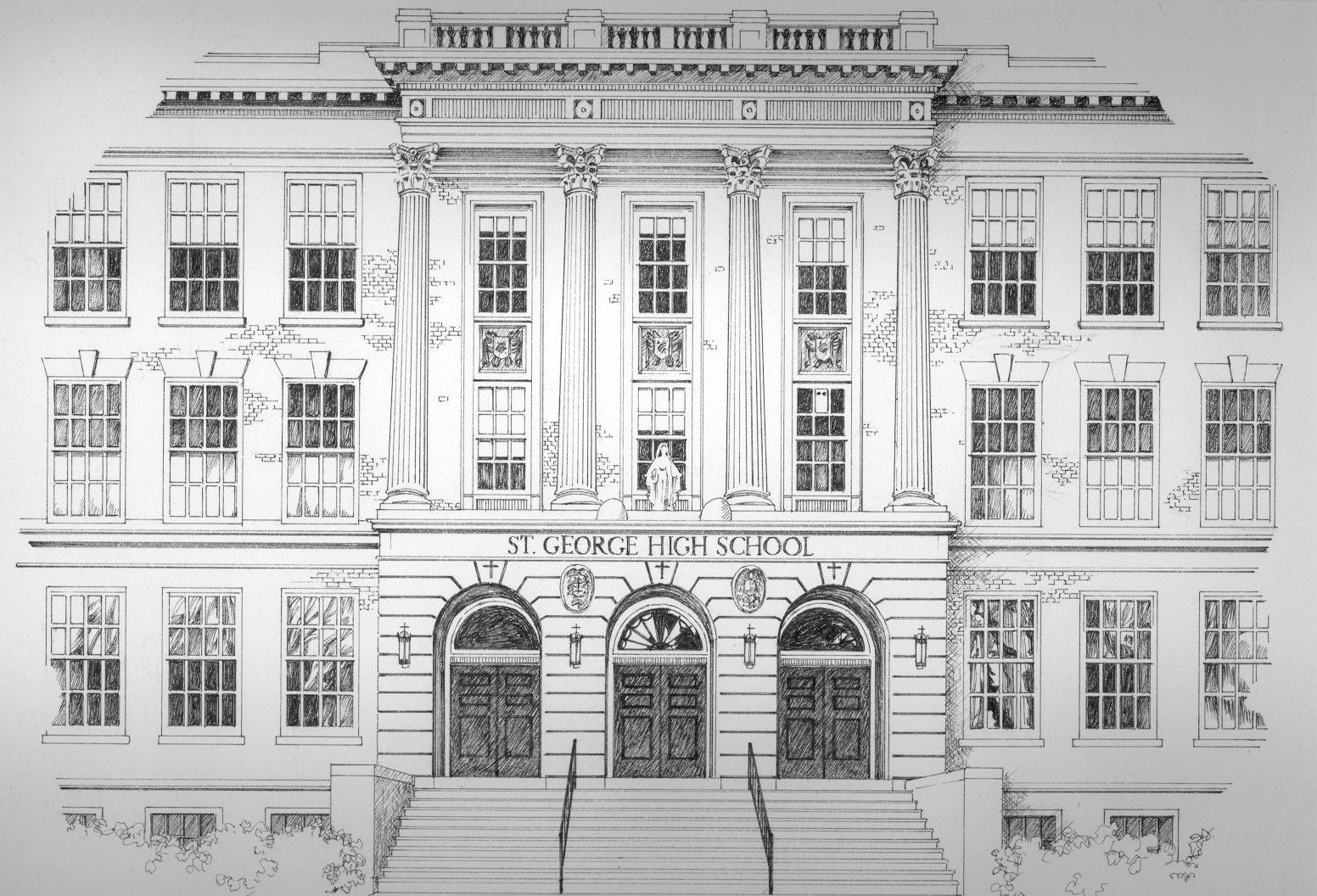 In 1926, property in Evanston, Illinois was purchased from the Sisters of St. Francis for the purpose of constructing a Catholic High School for boys of the North Shore district of the Archdiocese of Chicago. Ground was broken on February 15, 1927 and on September 12, 1927, St. George High School opened with 152 students, consisting of four freshmen classes. The school building was a three-story structure containing thirty classrooms. It included a library, cafeteria, gymnasium and a beautiful tiled swimming pool. Next to the school was a spacious athletic field. The laboratories for biology, physics, and chemistry were completed with the most modern equipment. The curriculum of St. George included a four-year general course, which prepared students for college, and a four-year commercial course, which prepared young men for entering the business world.

The finest teachers, the Christian Brothers, had been selected for the new school. This body of religious, which dedicated their lives to the teaching of young men, won the hearts of the students who entered St. George from the start. Former alumni still speak with affection and admiration of these men who instilled in them the Christian Brothers’ spirit. The first faculty was made up of Brother Justinus Elzear as the Director, and Brothers Hermes Michael, Josephus Bertram and Joachim Michael. William R. Maher was the first Athletic Director.

Brother Justinus Elzear was a man of brilliant personality, dynamic energy and great ideas. During his six-year term (1927-1933) many activities and organizations were started – the Mothers’ Club, the Fathers’ Club, The Georgian (yearbook), The Dragon (School paper), School band, dramatic society and the debating society – and flourished. Athletic teams in football, basketball, swimming, boxing, baseball and track were formed, bringing the name of St. George before the public. The enrollment grew to more than 600 boys. However, in 1933, when Brother Lawrence David became Director, the economic devastation brought on by the Depression created a decrease in the enrollment, resulting in a severe financial problem for St. George. Fortunately, Brother Lawrence was an experienced administrator and with solid management skills he capably and successfully directed the school during this period.

By 1939, the economic condition of the country stabilized.  A new director, Brother Hillary Bernard, was well prepared with wisdom and experience to further develop the scholastic and athletic departments of the schools. Under his guidance, the school enrollment again began to increase. Because the graduates were so well prepared, they applied and were accepted at many prestigious institutions such as Loyola, Notre Dame, Catholic University, De Paul, Northwestern, Michigan, Marquette, St. Mary’s, and the University of Chicago. At these respective colleges, they reflected academic glory on St. George and the Christian Brothers. During the years of World War II, Brother Ignatius Patrick took over the direction of St. George. His strong hand was greatly needed in those days of educational uncertainty and anxiety. He introduced several classes which aided students when they were called to serve in the United States Armed Forces. Many senior who took examinations for Officer Candidacy did so well that St. George gathered new honors. Of the 900 St. George alumni who served in the Armed Forces, 44 of them never returned from the war.

Chuck Jacobus (’45) sent a report from this time: “The Dragon football team in our day (the fall of 1943) won the Catholic league & City of Chicago championships, and then went on to beat the New York City champions. Many of those players made names in college and pro ranks and many careers were interrupted and altered by WWII. The coach, Max Burnell, was a legend, and his son Max Jr. became a St. George quarterback several years later.”

In August of 1945, Brother Julius Edgar became the Director of St. George. During the next two years, the student body grew from 700 to 1,100. Four new classrooms were added and many new improvements and repairs were begun. During the 1950’s, St. George came of age and took its place among the other mature, leading secondary schools of the Archdiocese.