MAX BURNELL WILL BE MISSED BY ALL 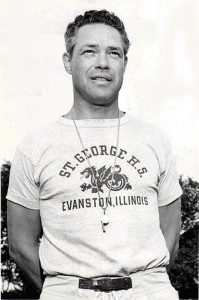 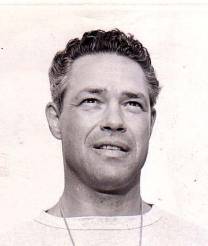 Coach trained players for victory and for life

Max H. Burnell Sr. believed that coaching was more than training varsity squad players to prevail on the football field. It was also about preparing teenage boys to steel themselves for hard tackles beyond the gridiron.

Throughout his 20 years at St. George High School in Evanston, said his son, Mr. Burnell felt it his duty to build his players into men, because he had been orphaned as a boy.

“My dad, because of what had happened to him when he was young, was concerned about the young men who played for him,” said Max H. Burnell Jr. “His rules were how you play football roll over easily into how you are as a man.”

The coach inspired his players to believe in themselves, think positively and adjust to life’s setbacks, said relatives and former players.

“You modeled life after him,” said Bronco Telkes, 76.
Telkes was on the 1943 Dragon team that won the Mayor’s Bowl City Championship at Soldier Field and a clash between varsity champions from New York and Chicago at Harlem’s Polo Grounds.

Mr. Burnell, 90, a former athletic director and varsity football coach at St. George who led the school to two all-city championships, in 1943 and 1953, and a slew of titles in the Chicago Catholic football league, died of Alzheimer’s disease Wednesday, Oct. 20, in Baylor University Medical Center, Dallas.

In his youth, Mr. Burnell excelled in sports. As a high school student in Minnesota, he was named an all-state player in varsity football, basketball and baseball. In college, he played for two years for the University of Notre Dame football team. Later, he played halfback for the Chicago Bears under George “Papa Bear” Halas.

Born in Duluth, Minn., Mr. Burnell lost his father and mother when he was about 12 and the family was living in Bellingham, Wash., said his son, who has never been able to find out how his paternal grandparents died.

Mr. Burnell returned to Duluth, where the Christian Brothers Catholic community took him in. He became an honor student in high school and was admitted to Notre Dame on a football scholarship in 1935.

After graduating in 1939 with a bachelor’s degree in business administration, he coached several sports at the South Bend, Ind., Catholic High School. He also moved to Michigan, where he played for two years for the Detroit Eagles professional basketball team, his son said. Mr. Burnell came to St. George in 1943 and coached the Dragons until 1963. He left Illinois in 1963 to coach at Bishop Lynch High School in Texas, but he returned to the Great Lakes region, where he took on a series of high school coaching positions.

In addition to his son, Mr. Burnell is survived by a daughter, Marla Moser; five grandchildren and 13 great-grandchildren. His wife, Kaye, died several years ago.